While managing the demolition of Swifton Commons in Bond Hill, O’Rourke Wrecking offered a series of five training sessions held at the MidPointe Crossing site for a select group of students in the Building Technologies program at Woodward Career Technical High School.  With each training session, the students spent an hour of classroom training followed by an hour of hands-on training at the site.  Throughout the course, students learned about heavy equipment operations, safety and hazards, inspections, and demolition techniques. Many of the sessions were led by O’Rourke Project Manager Jeff Sizemore, while featuring guest instructors, like structural engineer Randy Wilson of THP. 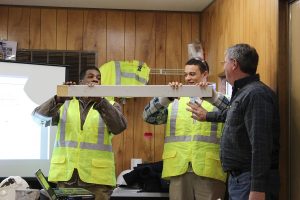 The students gained hands-on experience in cutting torch operations for steel cutting, and with 80,000-pound hydraulic excavating equipment used at the Jordan Crossing demo site.  That class in particular was the students’ favorite.  Da’Jion Bogan, a senior at Woodward, was most surprised by the opportunity to “operate the big rig.”

“Though it was very heavy equipment, I was surprised at how easy it was to work on it.” Bogan said they also studied what can happen if you don’t operate the machines correctly.  Senior Jordan Quinn, who says he wants to be a video game designer someday, agreed the experience working the heavy equipment was the best part of the class. “It was a lot like a video game.”

The Building Technologies program at Woodward is under the direction of West Davis. Davis also worked with his students at the site for several days in 2013 to secure the vacant building prior to demolition, and raised funds for a service trip to repair storm-damaged homes.  About nine students participated in the O’Rourke training sessions, which concluded on January 9, 2014. 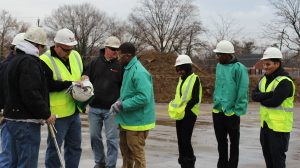