FC Cincinnati donates $200,000 to The Port for affordable housing

This contribution brings FC Cincinnati’s total investment in housing-related initiatives in the West End to $450,000, including:

“Our goal has always been to be a good neighbor which is why we continue to support affordable housing initiatives in the West End. I applaud the work of Seven Hills Neighborhood Houses and The Port in the West End and we are pleased to support initiatives for equitable development,” said Jeff Berding, President, FC Cincinnati.

“We have said from the start affordable housing must be a part of the growth in the West End,” said Laura N. Brunner, President and CEO of The Port. “This additional funding from FC Cincinnati allows The Port, in collaboration with Seven Hills Neighborhood Houses and neighborhood stakeholders, to deliver on our efforts to build thriving neighborhoods with a range of housing options to benefit the entire community,” Brunner continued.

In 2018, the West End became a focus neighborhood for The Port. Through its role in financing the FC Cincinnati stadium, the Port works with the West End’s community development corporation (CDC), Seven Hills Neighborhood Houses, on equitable development.

“Seven Hills Neighborhood Houses is pleased to partner with the Port and FCC to ensure affordable housing remains in the West End,” said Alexis Kidd, Executive Director of Seven Hills Neighborhood Houses, Inc. “This effort will require greater synergy and investment, but this is definitely a great start from two great partners. We welcome other investors to join with us in preserving opportunities for all in the West End.”

FC Cincinnati is a professional soccer team that plays in Major League Soccer, having entered the league as its 24th team in 2019. The club’s wide and diverse ownership group is led by controlling owner Carl H. Lindner III, as well as managing owners Meg Whitman, Scott Farmer, and George Joseph. Originally founded in 2015 by Lindner III and current president Jeff Berding, FCC played in the second-division United Soccer League (USL) from 2016 to 2018 before moving to MLS. The team currently plays its home games at the historic Nippert Stadium on the campus of the University of Cincinnati, while its $250 million, privately funded, 26,000-seat soccer-specific stadium is constructed in the West End neighborhood of Cincinnati. The world-class stadium is expected to open in Spring 2021. | Follow the team on social media on Twitter, Instagram, Facebook or YouTube, or visit the club’s official website: fccincinnati.com.

When West End Stadium opens in Spring 2021, FC Cincinnati’s future home is expected to be one of the most ambitious soccer-specific stadiums in not only North America, but the world. Critically acclaimed firm Populous designed an innovative and forward-thinking stadium that will be one of the largest soccer-specific facilities in Major League Soccer. The $250 million, privately funded stadium will have a 26,000 capacity, with the closest seats within 15 feet of the field. The design includes 53 traditional suites and 4,500 premium seats throughout four premium club spaces. Additionally, the team’s famous supporters’ section, The Bailey, will grow to be more than 3,100 strong and loom over opponents at a 34-degree angle at the stadium’s north end. A 360-degree canopy roof will cover every seat in the stadium, but still allow sufficient sun in to grow a natural grass field. The stadium will have five team locker rooms, including a comprehensive team suite for FC Cincinnati that features a dressing room, coaches offices, lounge, equipment storage and the Mercy Health Center of Excellence for the team’s medical and game day fitness needs. West End Stadium will meet all current requirements to host CONCACAF and FIFA events, featuring top national teams from around the world, including the U.S. Men’s and Women’s National Teams, as well as the world’s top club teams for friendlies. | More information about the stadium is available at Twitter, Instagram and Facebook, or visit the stadium’s website.

Since 1961, Seven Hills Neighborhood Houses has been serving Cincinnati’s West End Community as a social services resource and community gathering space.  The Neighborhood House is located at 901 Findlay Street in an 18,000 square foot building. It is the safe-haven and second home for approximately 2,500 – 3,000 at-risk children, teens, families, seniors, and disadvantaged citizens annually. For additional information, please visit https://www.7hillsnh.com/

The Port was formed in 2001 to stimulate growth of the regional economy. Partnering with the City of Cincinnati and Hamilton County, the Port works to redevelop manufacturing and residential communities to build the foundation of job creation and livable, viable communities where residents can experience economic prosperity. For additional information, please visit http://www.cincinnatiport.org. 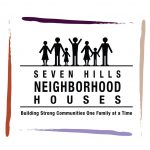