A NEW NEIGHBORHOOD OF FOCUS FOR THE PORT

Neighborhood revitalization involves many partners, collaborative effort and sustained conversation to achieve a shared vision. All of these elements are under way as FC Cincinnati prepares to build a $200 million soccer stadium in the West End. 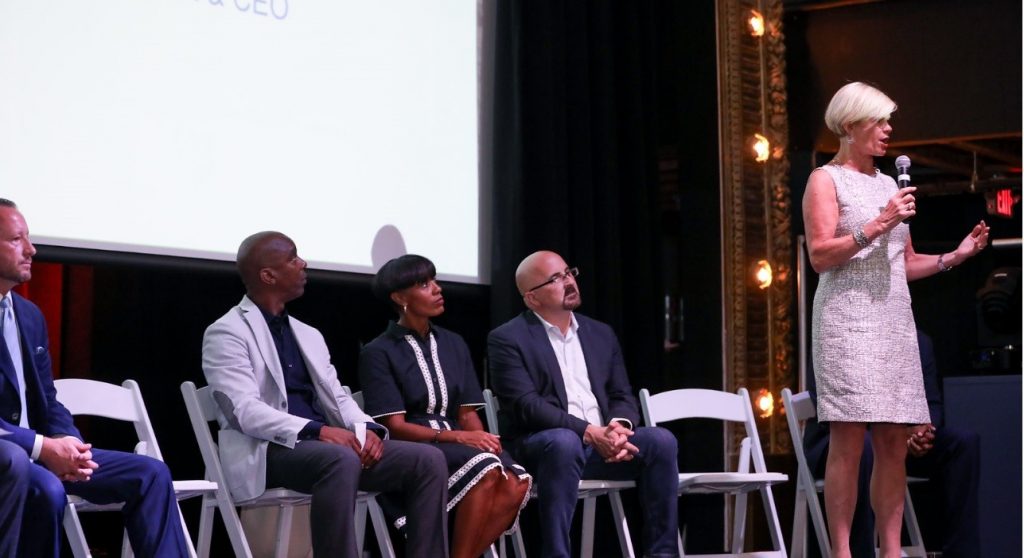 The Port’s CEO Laura Brunner addresses the audience at the July 9, 2018 FC Cincinnati Stadium diversity and community outreach symposium featuring project partners African-American Chamber of Commerce, The Port, Turner Construction, MEIS architectural firm, Elevar Design Group and Jostin Construction. The FC Cincinnati MLS stadium will be a public finance project of The Port, owned by the organization, and will meet or exceed our economic inclusion goals of 25% MBE, 7% WBE and 30% SBE spends.

The Port will serve as a significant financing partner on the stadium project with a strong combination of project ownership and the issuance of bonds. We also expect to make a significant investment in housing and historic stabilization through the tools of the Hamilton County Land Reutilization Corporation (Landbank.) On April 16, 2018, the Port entered into a community benefits agreement with FC Cincinnati related to its soccer stadium investment in the West End – an agreement that was amended on May 16 to include the West End Community Council. The agreement outlines commitments to West End residents and stakeholders that support anti-displacement of legacy residents; bolster economic development and equitable growth; include West End residents in stadium construction jobs; and facilitates community input on projects as redevelopment inevitably accelerates in this historic urban neighborhood. As a result of our role in the public finance of the stadium, our participation in the community benefits agreement, a commission of a housing study, and our anticipated investment in housing and stabilization, the Port has committed to making the West End neighborhood a Focus Neighborhood.

The Port’s early West End involvement in 2013 was focused on property acquisition and historic stabilization through the tools afforded to the Hamilton County Landbank. In May 2018, the amended CBA provides the critical commitment by FC Cincinnati to pay for a housing study and community engagement. Both of these items will inform many future developments in the neighborhood, including helping to guide the Landbank, HURC and The Port, in collaboration with the West End’s long-time Community Development Corporation, Seven Hills Neighborhood Houses (SHNH), to preserve, improve and expand upon residential and commercial real estate options for existing West End residents.

We have been meeting with a number of community organizations in the West End throughout 2018, including SHNH, the West End Community Council, LISC Greater Cincinnati, to inform our work with the community and build community capacity.

Our expanded work in the West End will include actively working with SHNH to protect the community’s interest by acquiring tax delinquent and vacant properties and to preserve historic buildings.