Exclusive to The Port

Its glittering dome roof was a beacon of inclusion. Its lobby a warm cloak of community.

For generations, the Regal Theater served as more than a place of entertainment in Cincinnati’s historically black neighborhood, the West End. It was the community’s cornerstone during some of the city’s and nation’s most tumultuous times.

There, everyone was welcome, children were safe and, regardless of what was happening outside, worries waned and possibilities flourished.

“It was where everyone went,” West End resident Fannie Shaw said, her smile and memories unfolding as one. “You saw all your friends, and you could stay all day long if you wanted. The Regal gave the community a sense of community – a sense of belonging.” 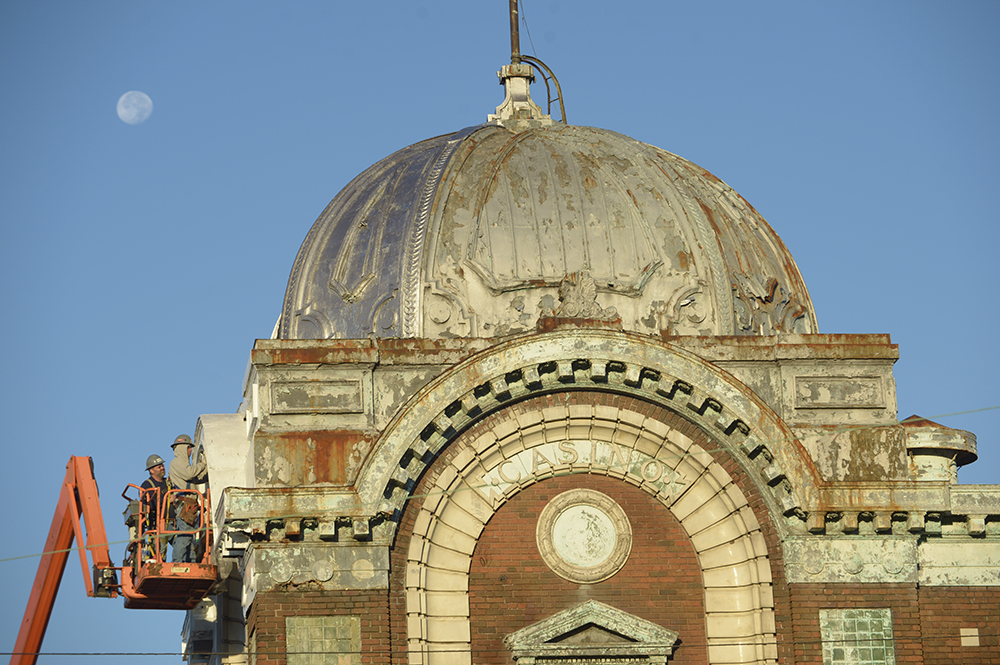 View of 2013 stabilization work on the former Regal Theater in the West End neighborhood of Cincinnati.

In operation for more than 80 years, the Regal began to struggle during the nation’s economic downturn in the 1990s, and closed in 1996. Left abandoned, it suffered fast and dramatic decay, and by 2002, was named one of the city’s top blighted properties.

In 2013, The Port tapped limited funds to stabilize the building from further decline and possible demolition. The Hamilton County Land Reutilization Corporation (Landbank), invested $151,000 to repair the leaking roof, broken windows and seeping walls, keeping the elements out and preserving what remained of the beauty within. The Landbank acquired the property in 2013.

Today, more funding is needed to clear crumbled asbestos, sagging ceilings, overall decay, and restore the grand stage and decades of debris-covered memories. The City of Cincinnati included $150,000 in its 2019 budget to remove the asbestos. The Port signed a Memorandum of Understanding with Seven Hills Neighborhood Houses to revitalize West End properties in a manner that mitigates displacement and promotes economic and community development opportunities for West End residents. The Regal Theater’s future will be a collaborative decision that includes robust community engagement.

Regardless of its current condition, the local community embraces it nearly as much today as it did back then.

“We don’t have much money here, but I am sure residents would each give what they could to help keep our theater,” said SharRon Jackson, who grew up attending movies and meeting friends at the Regal. 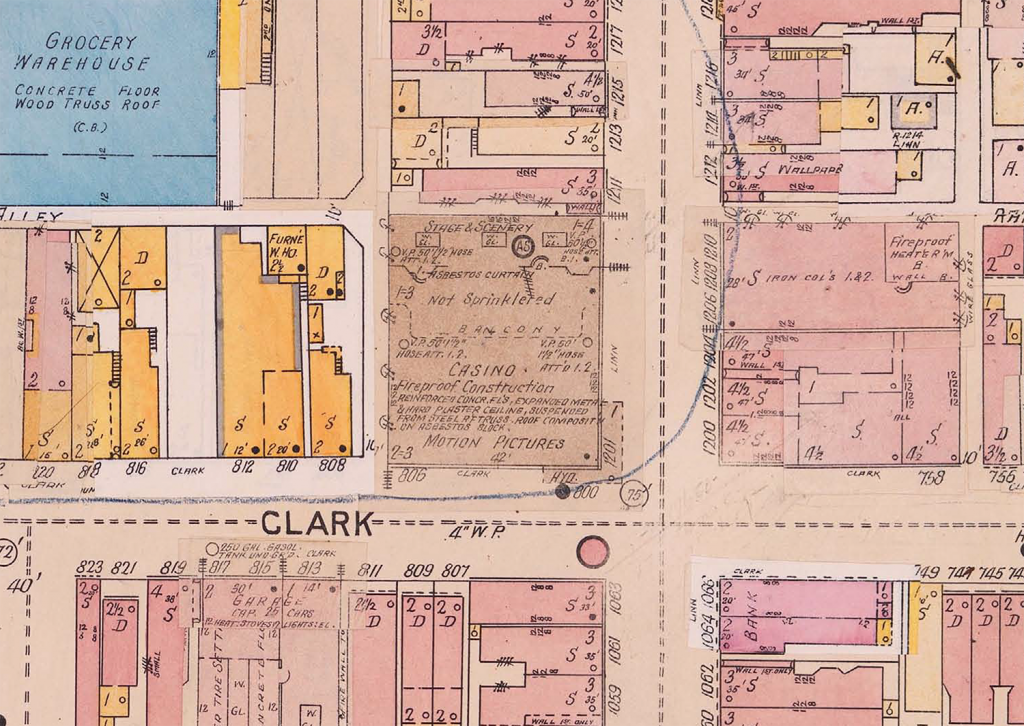 View of the Regal Theater (formerly the Casino Theater) on Sanborne Fire Insurance map of Cincinnati.

History of the Regal

Covering the northwest corner of Linn and Clark streets, the building opened in 1914 as the Casino Theater, hosting national vaudeville acts and providing employment for many residents. But it became part of the neighborhood fabric when Jack Goldman moved from Cleveland and bought the theater in 1936 to bring films and entertainment to the local black community.

During those early years, the West End was both a mecca for and the center of Cincinnati’s black community – and home to nearly 70 percent of the city’s black residents.

“The combination of a continually expanding African American population, increased racial barriers to keep African Americans out of other areas of the city, and the development of very few employment opportunities outside of the West End also caused much energy and focus of the African American community to look inward,” according to Dr. Eric R. Jackson, Professor of History and Director of the Black World Studies Program at Northern Kentucky University.

Goldman added local entertainment when he turned the 1,500-seat theater into a “black-oriented” movie and entertainment house, featuring both films and live shows. The long list of entertainers who graced the 40-foot stage included famed jazz musician Lionel Hampton, James Brown, Smokey Robinson, Gene Chandler – who made the “Duke of Earl” a headline song, Sammy Davis Jr., and musicals like “Tangerine” and “Irene” by acclaimed producer Carle Carlton.

“We couldn’t afford to see shows at Music Hall – and even if we could, we never would have been, or felt, welcome,” SharRon Jackson said.

“My mom used to look at the window and watch me walk down the street to the Regal and knew I was safe. You know how they say about it taking a village to raise a child? Well, to us, that village was the Regal.

“I remember seeing Smokey Robinson there – and got so mad when they said his wife, Claudette, was with him.” Her crush on the Motown superstar was boundless. “Those were the days,” she said laughing possibly more at herself than time gone by.

View of 2013 stabilization work on the former Regal Theater in the West End neighborhood of Cincinnati.

She’s not alone. Mention the name “Regal” on any street corner in the West End or to anyone who grew up there, and the stories flow faster than a listener can follow. ‘Mr. Charlie’ manned the front door, another familiar face handed out the “best hot dogs in the city” and Ms. Mary gave any child talking too loud or fussing too much “that look” that brought behavior back in check.

“Every time I drive by that old building and see it’s still standing, like a sleeping giant, it just makes me so sad. It’s hard for some to understand how we can have such affection for a building, but it was more than movies, it was a place for conversation, a place to be and belong.”  – Hamilton County Common Pleas Court Judge Melba March

Marsh said, as a young girl and then teenager, she learned about civil-rights marches, the latest activities of Martin Luther King, the Vietnam War and the deaths of Bobby Kennedy and King. “You’d listen as people talked, listened to different opinions, and then went home and asked questions and talked some more.”

She also learned about perfume, lip gloss, false eyelashes and dating from the older girls while they were “primping” in the bathroom. “I just wonder, where do people hang out today, where do they feel safe, and feel safe sending their kids?”

Three generations of Goldmans – Jack, Burton and Gary – ran the Regal with a commitment to keeping prices low, the air conditioning on and a focus on the community. A 15-cent ticket was good for back-to-back movies in the early years, going up to just $2 in later years. Then there were the all-night showings, when children and adults came dressed in pajamas with blankets in hand. “I’d go in the afternoon and not leave until the next morning,” said Lazarus McKinnes, 62.

“I went to the movies every Saturday with my dad,” said Hamilton County Municipal Court Judge William L. Mallory, Jr.

Sixty-year-old Barbara Davis said her grandchildren, having heard the stories of all-day movies, keep asking if they can go to the Regal, too.

Former City Councilmember and current Hamilton County Municipal Court Judge Tyrone Yates didn’t grow up in the West End, but attended the Regal as an adult, seeking to understand the community’s deep attachment to the old theater. He saw Boys in the Hood and was surprised that nearly everyone in the theater was talking back to the screen, becoming part of the movie.

“It was a place everyone felt comfortable. It was a place that was their own.” – Hamilton County Municipal Court Judge Tyrone Yates

When the Regal wasn’t showing movies, it was hosting fundraisers for children in need, children with disabilities, area schools, educational programs of all sorts and an annual Christmas party for 4,000 community children.

The Regal also hosted local talent shows, with one winner going on to sing with Lionel Hampton.

When Jack’s grandson, Gary Goldman, took over the theater, he split the theater into three sections and added two more screens to bring in more viewers. “I grew up in the Regal. The cashier held me on her lap and let me punch the cash register’s keys. People see me around town and still call me ‘Mr. Regal.’”

After 33 years as owner and manager, Goldman faced a failing economy. Plus, the city’s redesign of the West End, which replaced housing with light industrial, had cut his audience base. With business steadily declining, he sold the Regal in 1996. Its new owner padlocked the doors.

“I thought the interest (in the Regal) would wane over the years,” Goldman said, “But the experience is so engrained in people’s lives — they still care.”

Next Steps: Preserve and remember

Local community theaters like the Regal are making a comeback in Great Britain and Scotland as developers see value in creating a sense of belonging and the role entertainment plays in combating loneliness, isolation and exclusion for society’s most vulnerable residents. Plus, movie experts say, cinema can foster social skills. “Movies build our skills for listening to different sides of a conversation or argument and empathizing with the struggles of our fellow human beings — whatever their views may be,” said Manny Strauss, a Washington, DC, based advocate of community theaters.

Fannie Shaw isn’t certain the Regal should return as a movie house. But it should reopen, she said. “Today, we only pay attention when we feel something is being taken away from us. We need to be conscious of what we have – hold on to it and preserve it.”

Preserve and remember, she said, a time when people walked the alleys unafraid. Everyone was a neighbor. And, being a part of something made you stronger than when you stood on your own.

Lisa Popyk is a former foreign correspondent and reporter, working in Paris, the former Soviet Union, the Middle East, Washington, DC, and in Cincinnati for the former Cincinnati Post. An award-winning writer and reporter, she also helped open the Newport Aquarium as communications leader and The National Underground Freedom Center as marketing director. Most recently, she worked for 14 years at Procter & Gamble, leading corporate communications and crisis management for several business units and Company Officers. She lives in Cincinnati and is the mother of two boys.