Price Hill proposed as next for Port Authority rehab program 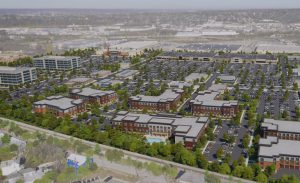 Mayor John Cranley has recommended including funding in the City of Cincinnati’s 2018-19 budget for the Port Authority to expand its targeted revitalization initiative to the Price Hill neighborhood. On May 25, Mayor Cranley said he was proposing to take the Port Authority’s successful REACH program to Price Hill with a grant of $2,280,610 -“that will be used for both residential and commercial revitalization from Glenway to West Eighth Street and everything in between.” Ken Smith, Executive Director of Price Hill Will, joined the Mayor at his announcement of his FY budget recommendations, which outlined a variety of investments for city neighborhoods including Avondale, College Hill, Bond Hill, Westwood and Evanston.

“Optimism is spreading through our neighborhoods,” said Mayor Cranley, whose budget recommendations will be considered by Cincinnati City Council for approval in the coming weeks.

Darin Hall, Port Authority Executive Vice President, said the Port Authority will meet with Price Hill community leadership soon to discuss the proposed program expansion. “Price Hill would be our third REACH neighborhood and we very much look forward to convening discussion with the neighborhood to define its redevelopment priorities,” Hall said. Started in 2014 in Evanston, REACH stands for Rehab Across Cincinnati and Hamilton County. Through the program, the Port Authority has rehabbed and sold 24 homes in Evanston and six in Walnut Hills.