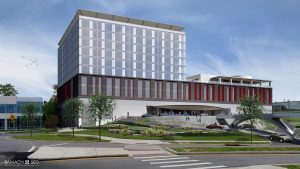 As part of a major overhaul that is drawing attention in the area, more than $355 million is being put toward the redevelopment of Madisonville, making the neighborhood a hotspot for new residents and visitors alike.

According to the Madisonville Community Urban Redevelopment Corporation, the transformation of Madisonville will be headlined with a $200 million project at the corner of Madison and Red Bank roads. The mixed-use space, all built on the 27-acre campus of the research company Medpace, will feature housing units and office and retail space.