Strengthening city neighborhoods by working with community partners and residents to foster sustainability, expand economic opportunity and stabilize property values and tax base.

The Port’s role in revitalizing neighborhoods can include everything from public finance and lending on major business and commercial projects, to historic stabilization, to construction of infill housing and rehab of existing housing stock. In the West End, The Port is providing public finance assistance to the FC Cincinnati stadium project, and is also a community development partner working in tandem with Seven Hills Neighborhood Houses, the neighborhood CDC. 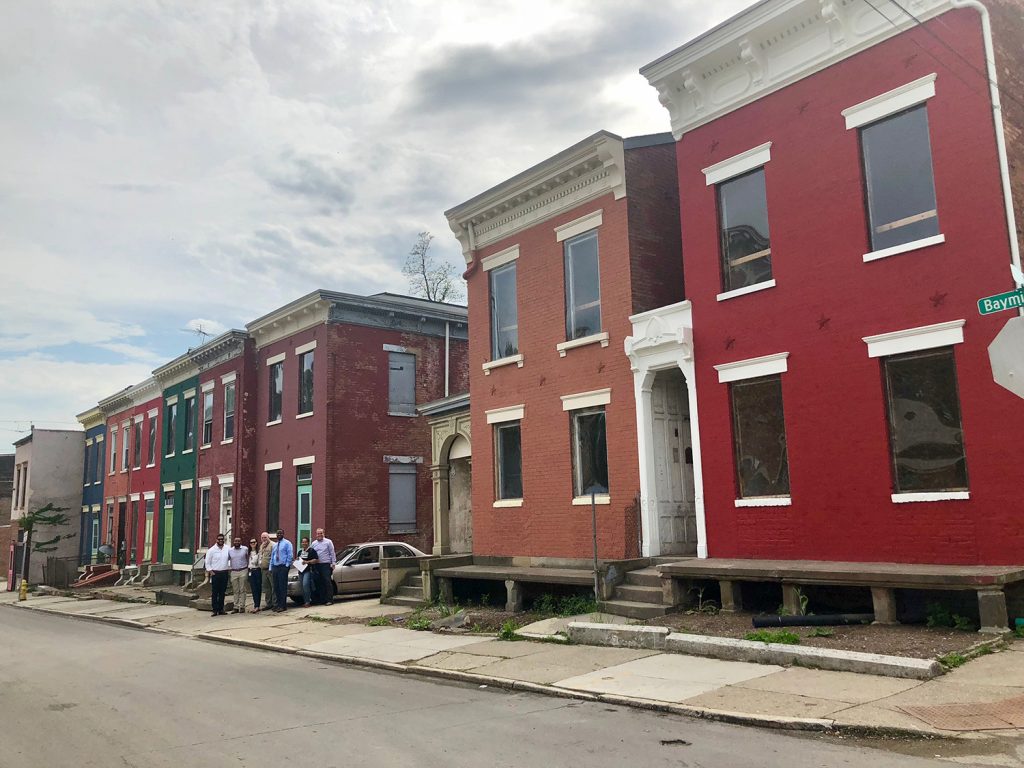 The Port team in front of the Baymiller Row Houses in the West End, recently stabilized in partnership with the City of Cincinnati through the Hamilton County Landbank’s Historic Structure Stabilization Program.

In Cincinnati’s West End neighborhood, The Port’s early involvement in 2013 was focused on property acquisition and stabilization through the tools afforded to the Hamilton County Land Reutilization Corporation (Hamilton County Landbank). In recent years, The Port has accelerated stabilization of vacant, blighted properties, in partnership with the City of Cincinnati, and holds property on behalf of the community for future redevelopment.

On April 16, 2018, The Port entered into a community benefits agreement with FC Cincinnati, related to its soccer stadium investment in the West End. The agreement outlines commitments to West End residents and stakeholders that support anti-displacement of legacy residents; bolster economic development and equitable growth; include West End residents in stadium construction jobs; and facilitates community input on projects as redevelopment inevitably accelerates in this historic urban neighborhood.

On May 16, 2018, the community benefits agreement was amended to include West End Community Council.

As part of the community benefits agreement with FC Cincinnati, The Port and Seven Hills Neighborhood Houses (SHNH) are working on further community engagement to update the WE Speaks plan, as well as to commission a housing study to research baseline conditions of the West End and to make recommendations on how to prevent displacement and create equitable development. In October 2018, The Port voluntarily entered in to a Memorandum of Understanding with SHNH formalizing guiding principles of the partnership that will shape the course of both organizations’ work in the West End. SHNH is the lead community development corporation (CDC), recognized by the West End Community Council and The Port.

After a robust RFP process, SHNH and The Port retained APD Urban Planning & Management to undertake a West End Housing study. APD-U is located in Atlanta, Georgia, and has played a large role in helping Atlanta’s Westside neighborhood plan for equitable development where the Falcons stadium was built. Having experience working in a neighborhood with a similar situation as the West End, as well as having ties to Cincinnati, made APD the top candidate for the housing study. They began work in October 2018, starting by collecting data of baseline property and demographic data. They have also participated in and observed a number of stakeholder interviews and meetings with various West End community leaders. The full housing study will be completed in 2019.

Retained by The Port and SHNH to facilitate community engagement is Design Impact (DI). In December 2018, DI convened a core team consisting of West End community councilmembers, residents, SHNH, the Community Building Institute, the City of Cincinnati, The Port and representation from FC Cincinnati. Since early 2019, DI has led the community through an engagement process to help inform both the West End housing study as well as update its WE Speaks plan in light of the FC Cincinnati stadium development. When the plan was created in 2016, it did not contemplate a multimillion-dollar sports stadium built in the neighborhood.

The community engagement events have been structured to encourage residents to create a vision for the neighborhood going forward by focusing on actions or policies that will help bring positive outcomes from the soccer stadium construction. Participants have also had opportunities to start building a relationship with both SHNH and The Port. The end result of this effort has been that more than 80 people have been interviewed, and there were four large group workshops with up to 40 residents in attendance at some sessions; and the community was able to create over a dozen policy ideas that will potentially be implemented during and after the housing study is complete.

In 2018, The Port closed on its project lease of the FC Cincinnati stadium and issued lease revenue bonds up to $250MM. As a public finance partner, The Port gains fee title to the project and leases it to FC Cincinnati as a strategy to save on construction costs.

In February 2019, The Port was asked to join a collective effort to help Monica Williams re-open her food business, Just Cookin’. Ms. Williams, a black restaurateur, closed her West End location on 15th Street after FC Cincinnati bought the building from which she had operated for six years. The Port recognized this as a critical opportunity to leverage its role and mission in order to contribute to the overall package that will get her back in business. The Port will provide to her, in the short-term, a semi-permanent and movable food station, lease it to her for a nominal amount, and locate it on property near the stadium.  Ultimately, The Port intends to identify a permanent space for Just Cookin’ from Landbank-owned inventory in the West End.

In March 2019, APD-U shared initial housing study findings of existing conditions and estimation of the number of people who are at-risk of being displaced. The data indicates, for example, that of the 3,068 housing units that are renter-occupied in the West End, 1,490 (48%) are considered market-rental units and at risk of displacement – principally because these units are unsubsidized and therefore not protected from future increases in market pressure and escalating rents. (About 1,454 rental units are subsidized. Renters comprise about 90% of the West End housing market). This data underscores the importance of continued engagement to help ensure that actions are taken at the community and city level to implement programs and propose changes to policy in order to prevent displacement.

So what is next?

In addition to the various monthly meetings that are happening in the West End, SHNH will host its next Housing Resource meeting on April 17, 2019 at 6 PM at the Neighborhood House (901 Findlay Street).  At the meeting residents will hear an update about the housing study, as well as get more information from groups like Habitat for Humanity, the Brighton Center, People Working Cooperatively, and the Homeownership Center, about resources available to maintain and strengthen housing.

“This is the first time we have had our public finance practice and our neighborhood revitalization work come together in such a significant way. The West End is a neighborhood that is important to us. As a party to the community benefits agreement, we are the third-party safeguarding the interests of the community and making sure there is due process, without putting undue burden on FC Cincinnati to be involved in such a granular way.”

Public Finance of FC Cincinnati stadium: On April 16, The Port’s Board of Directors met and approved preliminary terms for The Port’s role in financing the FC Cincinnati Stadium project and related public improvements. Terms include the issuance of bonds, as well as a project lease, by which The Port will own the stadium. The Board will have the opportunity to review and approve final terms. 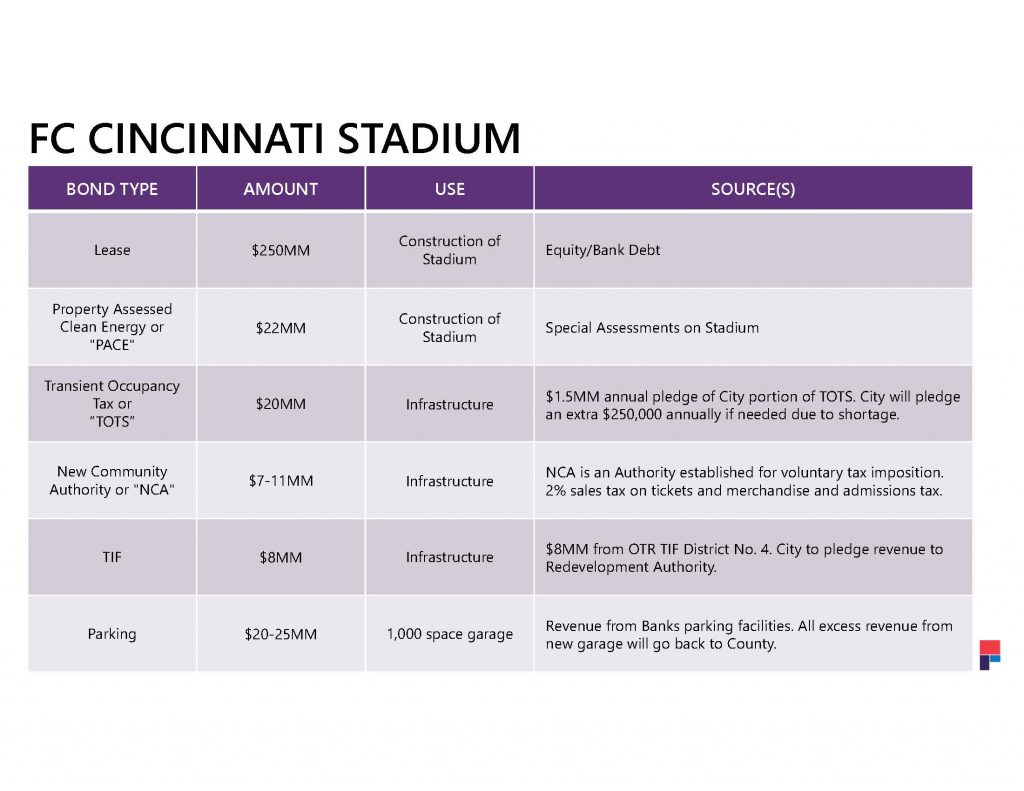 The lease and up to $250MM in taxable lease revenue bonds for the financing and construction of the FC Cincinnati Stadium were approved by The Port Board of Directors in November and closed in December 2018. The Board of Directors preliminarily approved the additional public finance tools in April 2018; final terms are expected to be determined and approved in 2019.

1201 Linn Street revitalization: The Regal Theater is a historic centerpiece of the West End’s Linn Street neighborhood business district. The vacant property was acquired and stabilized by the Hamilton County Landbank. In 2019, The Port will further stabilize The Regal Theater in partnership with The City of Cincinnati, and work with the neighborhood to revitalize it with appropriate uses consistent with its legacy of showcasing African American artists and musicians. Read more about the “Regal Theater.”

Hamilton County Landbank: Land banks were created to address the many problems municipalities incur due to abandoned properties. In Hamilton County, the Landbank is a critical neighborhood revitalization tool that works with partners to administer a variety of property acquisition and redevelopment programs that reduce blight and make properties productive. Local, public ownership of vacant, tax-delinquent properties is sound strategy that controls redevelopment. We are actively working to protect the community’s interest by acquiring tax delinquent and vacant properties and to preserve historic buildings as well as to improve the safety and security of the neighborhood. 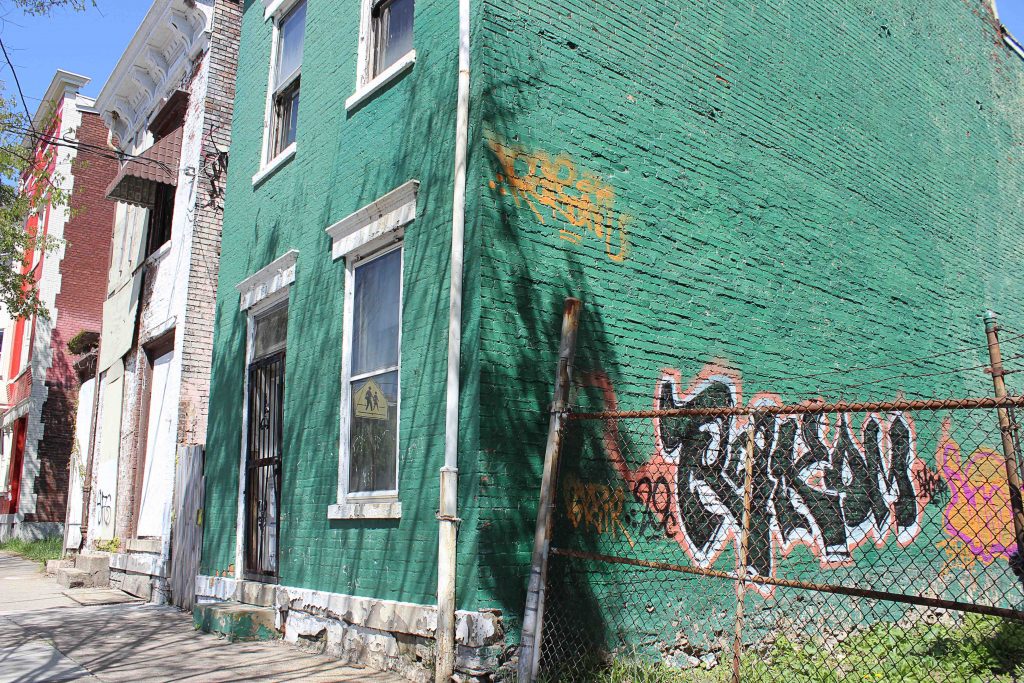 1910 Linn Street in the West End. Photo by Mikhaela Renner.

Inclusion: The Port’s Inclusion Policy will be the standard used to hire minority and disadvantaged contractors.

“From our first meeting, leaders and stakeholders in the West End impressed us with their commitment to their community and spirit of partnership. LISC Greater Cincinnati was happy to sponsor and participate in the planning process that led to the West End Speaks Plan which outlines a clear set of goals for the West End neighborhood. We continue to support community based leadership that is working towards those goals through our partners at the Seven Hills Neighborhood Houses, a long-standing community asset. We look forward to seeing grassroots, neighborhood based leadership further integrated into decisions that impact West End’s future.”