Bond Hill — The Cincinnati Gardens was an iconic entertainment venue for six decades, serving as a place to see sporting events, concerts and The Shrine Circus.

The Ahrens-Fox Fire Engine Co. was a Cincinnati manufacturer that operated from 1910-1977 in the City’s West End.

As the Greater Cincinnati Redevelopment Authority prepared the old Gardens structure for demolition last year, it received a request for an artifact from the building, remarkably related to the Ahrens-Fox enterprise.

A request for a piece of the old Gardens was nothing new – the Redevelopment Authority had already sold Gardens seats through a public sale; donated the five-foot CINCINNATI GARDENS porcelain letters to the American Sign Museum; and designed a method to delicately remove the 8-foot sculptures that adorned both sides of the building’s front entrance.

This new request came from the City of Wyoming, specifically the Wyoming Fire Department, asking the Redevelopment Authority for an abandoned piece of machinery found inside the Gardens during a routine safety check. A seemingly obsolete back-up generator bore the hidden treasure, unimpressive to an untrained eye perhaps, but a true miracle in the sight of Ethan Pagliaro, a Cincinnati firefighter who discovered it. Pagliaro, who is also a volunteer firefighter for Wyoming, recognized that the engine used to power the old generator was uniquely capable of powering up and running a vintage firetruck owned by Wyoming. A 1937 Ahrens-Fox firetruck, to be exact.

You see, the Wyoming Fire Department has a 1937 Ahrens Fox fire truck, with a Hercules engine in constant need of repair.  The engine and its parts are invaluable to the firefighting crew, who have found it next to impossible to find parts to keep the Ahrens-Fox truck going, so that it can continue to serve as a living legacy of a proud past and be leveraged as a ceremonial processional honor for fallen firefighters.

For years, they have searched for parts to repair a large crack in the cast iron exhaust/intake manifold.  They’ve employed piecemeal solutions to keep it limping along.  The Cincinnati Gardens unit and manifold is in perfect condition.  Securing this engine helps to build an inventory of parts as reserves so that the truck can be maintained and used for years to come.

“I come from a family of firefighters.  My son, Jared, is a paramedic/firefighter,” said Ron Shouse, Facilities Manager for The Greater Cincinnati Redevelopment Authority. “This request hit close to home for me, so I really wanted to make this donation happen if at all possible.” Mr. Shouse received the initial call from a friend, who found him listed on the Redevelopment Authority staff page.

“On behalf of the Wyoming Firefighters Association, I want to thank you for donating the generator motor from the Cincinnati Gardens to our organization,” Ethan Pagliaro said. “We are so thankful to Greater Cincinnati Redevelopment Authority and appreciate their efforts to help us secure the engine and continue our traditions as a proud department, ready to serve,” Ethan Pagliaro said. 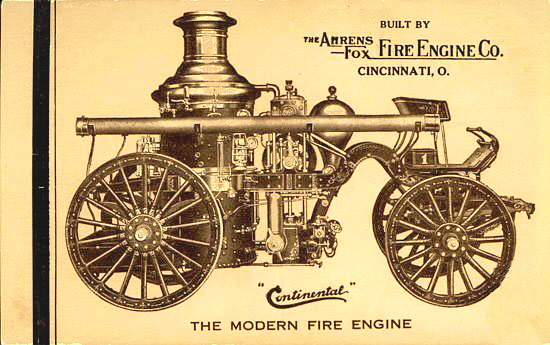 1911: The first motorized fire engine was built by the company and by the end of the following year, horse-drawn fire carriages were never built again.

1938: The last recorded delivery of an Ahrens-Fox fire apparatus was delivered to New York Engine Co. 65

1940: The company ceased production of fire engines due to war; company sold